On the day I meet up with Cliff Watkins from the Enid Blyton Society for my Enid Blyton tour it’s hot. So hot in fact that The Famous Five would’ve been taking off on their bikes and picniking on doorstop sandwiches, fruit cake and lashings of ginger beer, not walking around the streets of Beckenham. But I’m determined to see where this famous author who wrote 600 books, and who coloured my childhood with her stories, lived. 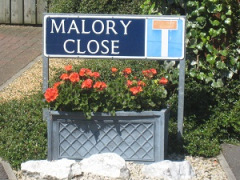 Street in Beckenham named after the Malory Towers series.

I’ve gathered already from email that Cliff is an intelligent man, but in person he’s even more so. Ten minutes into the tour he’s already told me more about Beckenham than I’d probably learn in a history book.

In his 70′s at least, Cliff also posseses an old-school gallantry, worrying that he’s walking on the inside of the footpath and that I could be in danger if a car mounts the kerb. We stop briefly at the BaptistChurch where Enid was baptised when she was in her teens. He manages to secure me a glass of orange juice from the ladies who run the church as he’s worried about me dehydrating.

As we’re closer to the three middle houses she lived in we do the tour in reverse order by starting in Elm Road and Clockhouse Road. Cliff knows a lot about Enid’s parents, their separation and young Enid’s ‘adoption’ by the Attenborough family who encouraged her writing. It appears she didn’t have much time for her father, a cloak-maker who ran off with a mistress. Or for her mother either who tried to hide her failed marriage by asking Enid and her brothers to tell people her husband was away on business. In fact Enid didn’t show up to either of their funerals. 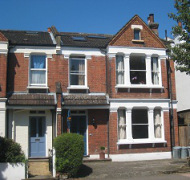 One of Enid’s two childhood houses in Clockhouse Road.

I ask Cliff if he thinks that grumpy Uncle Quentin in The Famous Five series was perhaps representative of her absent father? Cliff seems perplexed about that, and is not sure. I gather he’s not read much of The Famous Five, as he is more interested in Carey Blyton, Enid’s nephew who was a composer and wrote a song which inspired the Australian TV show Bananas in Pajamas. Shame, I would’ve liked to have an indepth discussion about Uncle Quentin.

Moving on….we reach Enid’s first home in Chaffinch Road which is a quiet, green leafy street. Cliff is interested that the home has just been sold and takes down the details of the real estate agent from the sign outside the house. He says he tries to keep in touch with the owners of Enid’s houses and has been inside several of them. He wanted to knock on the door of one of the previous ones and ask the owners if I could look inside as I was all the way from New Zealand, but I wasn’t keen on that idea.

After Chaffinch Road we stop for lunch in a cafe and I buy us lunch, since Cliff is giving me the tour for free. I eat my cheese, ham and coleslaw sandwiches while he nibbles on his cheese and pickle and keeps talking until his tea gets cold.

By now I’m beginning to appreciate the depth of Cliff’s knowledge of Beckenham’s famous people and famous people connected with Beckenham by any means possible.

I hear about Charles Darwin whose mail had to have ‘Beckenham’ written on the address, as that was where the sorting office was, otherwise his mail ended up in Northern Ireland. Then there was Harold Bride a Beckenham lad who was a telegraph officer on the Titanic and who was the town’s hero because he’d jumped into the water (after helping lots of people) and managed to survive.

After lunch the tour continues and we catch a tram, and then a train, to visit Enid’s final two houses that she’d lived in when she was married. By this time she was starting to make decent money from her writing and had children of her own. I ask Cliff about this as I’d read she didn’t pay them much attention. He said this was pretty accurate and that her own daughter had described her as ’a bit of a bitch’. 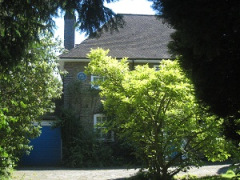 Enid’s final house in Beckenham at 83 Shortland’s Road before she moved.

Perhaps ‘George’ in The Famous Five was actually Enid’s alter ego then? And if she’d only had two children why was there Julian, Dick, Anne and George in the Famous Five? Unfortunately Cliff was not forthcoming about this side of things. But he does tell me there was a BBC TV drama starring Helena Bonham-Carter as Enid, and that there was a ‘primitive’ scene where Enid/Helena told the maid to ‘remove the child’ as she couldn’t bear it screaming while she was trying to write. Cliff thinks this is a bit over the top but says I should watch it anyway, even if it wasn’t filmed in Beckenham.

By this time it is mid-afternoon and I’m drooping from the heat. In contrast Cliff still seems quite lively and able to talk for at least another hour. We catch a bus and head to his house to meet his wife Veronica who kindly makes us sandwiches (better than the cafe’s) and gives us orange juice. Cliff then sells me a book he’s written on Beckenham for £6, discounted from £8.

Finally he escorts me to the bus-stop and waits with me until the bus arrives. If there’s one thing I’ve learned on my Enid Blyton tour, even if it wasn’t about Uncle Quentin or George, it’s that chivalry is definitely alive and well in Beckenham. 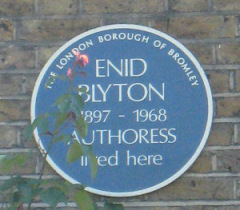