The following article is part of the an appeal to Historic England to classify the Library as a listed building.

Beckenham Library has played a central part in the area’s cultural and historical development and enjoyment but crucially has national connections with famous names and events. It should be included on the national list of buildings of historic and architectural interest for the reasons outlined below. 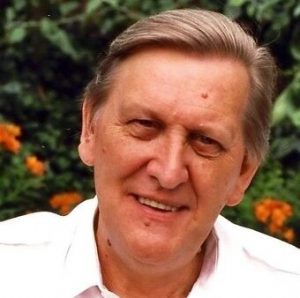 Carey Blyton, internationally celebrated musician and composer was born on 14th March 1932. He was the second son of Floss and Hanly Blyton and lived at 62 The Drive, Beckenham and was the nephew of Enid Blyton, another Beckenham resident whom he later collaborated with on musical compositions. He went to school at The Grange infant’s school, Beckenham and Beckenham Grammar School. His interest in music started when he took up piano playing following contracting life- threatening Polio. He visited Beckenham Library regularly after school inspired by its excellent music section and old stock records and scores which could be purchased.
He established the Beckenham Salon, a collection of artists, writers and poets in 1950 whose patron was Sir Arthur Bliss, later Master of the Queen’s Musick. The other members of this group were the poet Michael Hopkins, David Roberts, photographer, David Munro, poet and John Vosser, pianist. There was also collaboration with Hugh Bean.
Initially meeting in local houses, this group of performers cultivated their craft and from 1952, performed in five public venues such as the Old Council Offices, Beckenham Grammar School and Beckenham Library. Writing to Mike Cornich in 1997, Carey Blyton said ” the more I realise how very crucial were the years 1949-53, the Beckenham Salon was clearly seminal” Carey would perform his own compositions at these events and as a phenomenon his initiative can be seen as a forerunner of David Bowie’s Arts Lab in 1968.
Carey Blyton went on to produce a vast volume of works including 100 choral and solo works just in his early career. His career saw him producing music for TV, advertising and film. Between 1964-74 he was Benjamin Britten’s personal editor at Faber. One of his most famous works was ‘Bananas in Pyjamas’ written in 1972 during a car journey to entertain his son. He also wrote ‘The Hobbit’ concert music and the ‘Faber Book of Nursery Songs’ in 1967 and music for Dr. Who in 1969.
From 1956, he was Fellow of Trinity College of Music, London and in that year produced an’ Overture; Fantasia on French Folk Songs’. Between 1962 and 63 he worked with his aunt, the famous children’s author Enid Blyton to produce Mixed Bag of Children’s songs. Between 1963-73 he was Professor of Harmony, counterpoint and Orchestration at Trinity College of Music London.
He worked right through his life producing a one act ‘The Girl from Nogumi’ in 1976 and a trilogy ‘Sweeney Todd The Barber’,’ Dracula’ and ‘Frankenstein’ through the 1970’s and 80’s. His last works were ‘War song of the Saracens ‘in 1998 and ‘El Tango Ultimo’ in 2000.
Beckenham celebrated their famous son at Beckenham Library on 14th March 2002 to mark Carey’s 70th birthday. In attendance were founder members of the Salon, John Vosser, David Roberts and Mike Hopkins, Liz Biddle his music agent and the Mayor amongst many guests also including Nicholas Reed, author of ‘Enid Blyton in Beckenham and Bromley’. A 49 minute video was recorded by Brett Allen to mark the event and can be viewed online. Sadly, owing to ill health Carey did not attend and could only send his best wishes and he died shortly afterwards on the 13th July in Woodbridge Suffolk.

World War Two; Beckenham Library and refugees.
Beckenham Library was the last library to be built in Britain in 1939 opening a few months before the outbreak of war. It survived several bombing raids, kept open throughout the conflict and had staff who had come as refugees from countries such as Poland. The library played a vital part in keeping up morale and the area around was a Red Cross station and muster point. Hanna Schweizer, a refugee from Nazi Germany then living nearby in Hayne Road, loved the library and pioneered a play reading circle for children there. She then promoted the creation of a stage and musical entertainment for Children’s Theatre and put on plays such as ‘Prologue to Immortality’ on Saturday 13th March 1948 about the Trojan War. After the trauma of flight from persecution, Hanna recognised the healing power of group activities and public cultural events especially for children.
Another refugee was Francis Weiss, born in Germany in 1930, arriving in Britain in 1931 and whose father had been in the furrier trade. He helped the Beckenham Salon and hosted an evening at his house in Overbury Avenue on 14th October 1952. A good school friend of Carey Blyton he lent the group his Bluethner Pianoforte for live performances including lending his piano to a performance in the Library.

This arts festival attracted many names from the literary world who gave talks and ran workshops for the local community. Famous names included Joanna Czechowska herself a polish refugee who greatly appreciated the welcome she received in Britain and author of The Black Madonna of Derby, Lyn Stone artist and illustrator, sports writer Brian Scovell, Ian Bevan who wrote a history of Crystal Palace, Judith Niechciel, Imogen Robertson and Haille Rubenhol.

It has been overlooked that Beckenham Library was built under covenant, originally from 1896 on land donated by the Cator estate and forms part of a collection of buildings granted to help the learning and health of the Beckenham community which also included the Technical Institute constructed around 1901 and public swimming baths. Lord Cator was Lord of the Manor of Beckenham in 1785, built Beckenham Place, was a wealthy financier and friend of Dr. Johnson. His estates covered this part of Beckenham and it was subsequent members of the family that gave land to Beckenham Council to promote important civic provision.

Julie Andrews attended Woodbrook School and used Beckenham Library as her nearest library as a child. Bob Monkhouse also lived in Beckenham and loved the library. He later became an obsessive archivist with a collection of old TV and film clips of national importance. David Bowie another local resident was also passionate about books and was reported to take at least 100 of his favourite editions on tour wherever he went.
It is also important to note that Enid Blyton strongly encouraged Carey to continue his musical career despite setbacks and in this way contributed to his world-wide success, a point made in Carey’s obituary printed in the Daily Express on Friday 2nd August 2002.

The Historic England report fails to mention the special unique architectural features on the outside of the building which are of historic importance. On the Beckenham Road side of the building, the former Charter Borough of Beckenham’s armorial bearings are displayed which is a design of the white horse of Kent reflecting Beckenham’s pre-eminence as the richest town in Kent during the 1930’s. There are also two apple trees pointing to Kent as the ‘Garden of England’ and the two Beckenham rivers the Beck and Chaffinch.

The motto is ‘non nobis solum’ interpreted as ‘we are not alone’ or we work together.

Also, there are stone depictions of two mythical characters, an architectural conceit suggesting the Greek Muse of learning with the face looking directly out towards the former Technical Institute.

Beckenham Borough is a lost historic entity and the Library is an important visual reminder of the pioneering endeavours of this civic body which oversaw the construction of key buildings for local government and the community especially in the run up to the Second World War.

Beckenham Library deserves inclusion in the national list of protected buildings because it is an important and key location in the career development of the internationally famous musician Carey Blyton and provided the venue for his legacy to be celebrated in 2002.
The Library’s history demonstrated how those escaping from persecution in Nazi Germany worked with the library to provide entertainment for the community and more recently has attracted national authors to celebrate literature. The building, built by nationally acclaimed, award winning architects Gold and Aldridge was part of a hub of venues created from the Cator Estate to provide education, learning and recreation.