This album is on extended loan to me by Peter Wiseman who was given it by a neighbour in Beckenham.

She left a neighbour a bulging album which covers the detail of her voluntary work in great detail with photos, letters, citations, certificates, poems, invitations and lots of press articles about local and national events relating to her dedication as a nurse/orderly.

The album has brown leather covers and gold edged leaves. It is 9.5” long by 8” deep. Originally it was likely to have been 1.25” thick but it now closer to 2.5”

Because of constant use and the vast contents someone (perhaps Florence?) has bound the spine with 3.5” wide bandage. 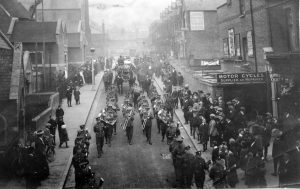 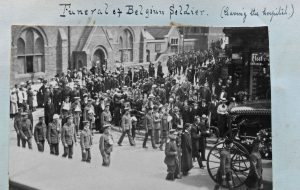 A couple of pictures from the album

I have photographed the exterior and most of the album’s contents.

To me, she comes across as a lady with a comfortable background who developed a passion for service to others.

With Pat Manning with whom I worked when she was compiling her book “Less We Forget – Beckenham & the Great War”, we traced Miss Eden’s life from her birth in 1889 in Charlton, moving to Bromley in 1891, thence to Lambeth in 1901, and Staines in 1911.

Miss Eden came to Beckenham in August 1915 to join Kent VAD 86 in Christ Church in Beckenham before transferring in April 1916 to Kent VAD168 in Bromley where she worked until 1925. When WWII began, she joined the Beckenham Mobile First Aid Unit for the duration of the war and later.