Maybe I should announce it? Should I?…”

Bowie’s Beckenham Oddity is an annual fundraiser, supported by David Bowie when he provided signed items for auction at the event.

This year the Bowie Archive has donated another item signed by him, more details of which will follow before the festival in August. 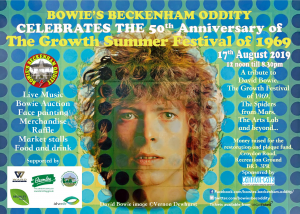 “Oh, to capture just one drop of all the ecstasy that swept that afternoon”

The 50th Anniversary of The Growth Summer Festival of 1969

Music lovers and fans worldwide will again be invited to come together in Beckenham, South London on Saturday 17th August to celebrate:

DAVID BOWIE★ THE GROWTH SUMMER FESTIVAL OF 1969,★ THE SPIDERS FROM MARS, ★ THE ARTS LAB and beyond…

The fourth Bowie’s Beckenham Oddity will take place at Croydon Road Recreation Ground, centred around the same iconic bandstand where Bowie and his friends from the Beckenham Arts Lab held their Growth Summer Festival and Free Concert back in 1969. The festival coincided with the release of Bowie’s first hit single, Space Oddity, and the day was later immortalised with another song, Memory of a Free Festival.

This year’s event kicks off at noon and we’re pleased to announce the return of some of the Growth Festival line up, reuniting for the first time in 50 years. These include Keith Christmas, Bridget St John, David Cousins (The Strawbs), Amory Kane and Bill Liesegang.

The event will also see the return of Maggi Ronson and her band. The full line up will be available on the Bowie’s Beckenham Oddity Facebook page shortly.

We also have the pleasure of announcing that Kevin Cann and Phil Lancaster will be at this year’s Oddity. They will be signing copies of their books; Any Day Now and At the Birth of Bowie – Life with the Man who Became a Legend.

Other attractions on the day will include food and drink by local vendors, memorabilia stalls, face painting, kids’ rides, raffle and of course the auction of Bowie related items (including a signed David Bowie item kindly donated by davidbowie.com /David Bowie Archives.)

Tickets are available online in advance from:
https://www.wegottickets.com/sct/uhqqwyAj2K

Tickets will also be available at the gate on the day of the event.

Just over £71,000 has been raised via the Festival, brick sales and donations, the H.L.F (Heritage Lottery Fund) grant application failed for the second time and because of that the council has put in £83,000 into the bandstand fund. The restoration cost is at present £191,000, so we’re not that far away from the work being started now.

Fans can also support the event via the personalised brick sales, which will be laid in their name (or a loved one etc) around the bandstand on its restoration. They can also donate to the Bowie Bandstand Restoration & Plaque Fund, that will honour not only David Bowie, but everyone that took part in the initial 1969 festival.

“We are so close now to reaching our target to finally be able to get this iconic bandstand restored and this is down to the Bowie fans worldwide uniting and getting this done! Beckenham has never been on the main Bowie related map of places to visit – let’s hope that changes when the bandstand’s finally restored!

I hope to continue with the Festival but when the work on the bandstand has been completed, we can move on to raising funds for other Bowie related projects etc., only time will tell.
A massive thank you to everyone that has supported the Festivals to date. To quote a certain Bowie song lyric – I bless you madly.

I’d like to give a special mention to Vernon Dewhurst and thank him for kindly allowing us to use his iconic Space Oddity album image of David Bowie for this year’s event. and of course to Mark Adams, davidbowie.com, Tony Visconti and Woody Woodmansey for all their support”

“To paint that love upon a white balloon”