The photo below is a postcard franked 1935. It shows how the road was laid out curving gently away from Beckenham High Street. 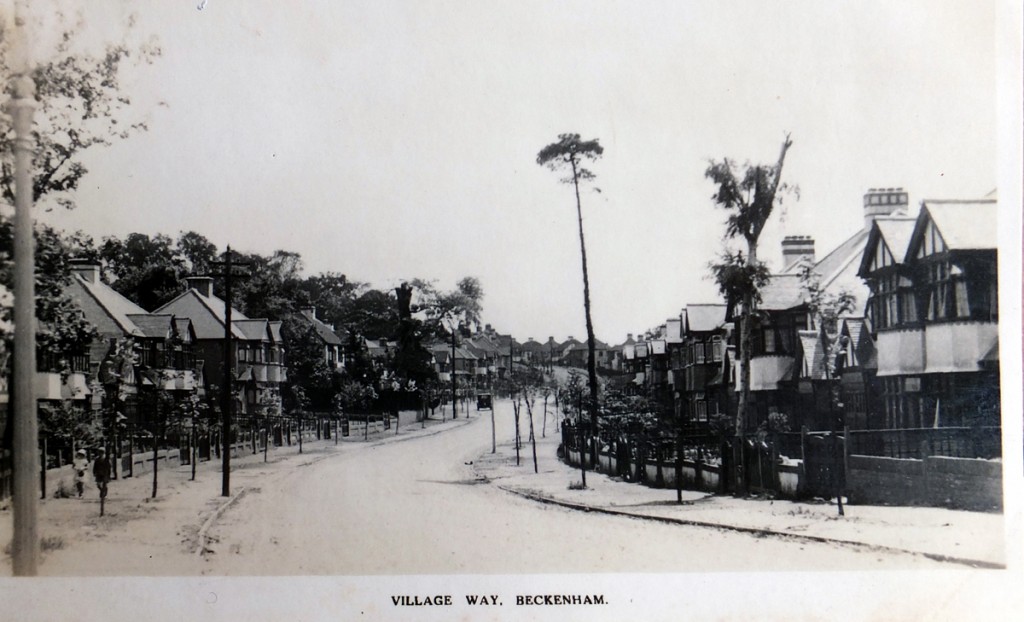 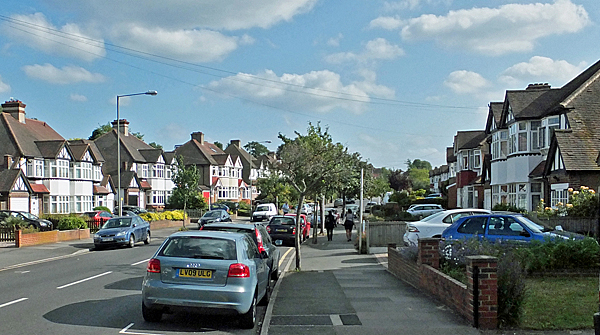 Village way runs from the High Street for over a mile to Upper Elmers End Road near Eden Park Station.

It is unique in that it is bordered by three parks.  From the High Street end, these are Croydon Road Recreation Ground on the right and a half mile further along on the same side is Crease Park.

Before the third park are the traffic lights at the cross roads (with Stone Park Avenue on the right and Crossways Road).  When the road was first built, these cross roads were at the highest point in central Beckenham at 175ft above sea level. (Within the Beckenham UDC area, the highest point was at Rock Hills (Paxton’s home) which is 280ft.)  Because of accidents Stone Park Avenue was lowered to give better visibility to traffic.

Beyond the crossroads in Village Way, on the left is Harvington Recreation Ground adjoining St John’s Church at EdenPark. 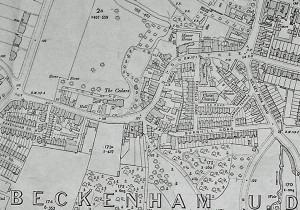 Village Way did not exist when this map was published circa 1911.

Later it would join the High Street south of ‘The Cedars’ (formerly ‘Village Place’) through the field shown between Elm Cottage on the left and Austin’s pork butchers shop next door to the Three Tuns P.H. on the right.

Since the Boer War, Elm Cottage had been the local headquarters of a battalion of the West Kent Regiment. 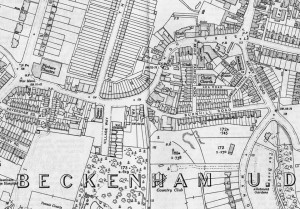 The next map was published in 1930.  Village Way is shown as a cul de sac.

The Cedars has been replaced by a shopping parade and its land used for the 1920’s housing estate which began with The Drive opposite the Pavilion Cinema. The cinema opened in 1914. 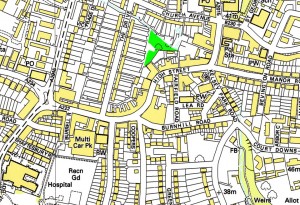 This 2012 map was supplied by Bromley Borough Council.  Both the cinema and Austins have been replaced by shops.

The Three Tuns building, now Zizzi, is hidden on the map by the new private road called Coopers.

On the left, St Edmund’s Catholic church is shown but unnamed on the map. Sainsbury’s is not labelled except for its car park.

This park is in the centre of the Town with easy access from the High Street. It opened in 1891 after action by leading members of the community, led by the proprietor and publisher of the town’s newspaper, the Beckenham Journal, T.W. (Tom) Thornton. Beckenham’s population had grown tenfold since the railway arrived in 1857 and they feared there would be no open spaces left.

The park proved to be a popular venue for recreation, civic activity, fairs and exhibitions. In 1905 it saw the launch of the first airmail in a gas filled balloon.  Harold Bride, the radio officer on the Titanic was given a heroes welcome when he was carried around the park shoulder high and asked to speak from the band stand. Charity events raised large sums for Beckenham Hospital and the annual flower show matched Chelsea.

It was part of the Charter celebrations when Beckenham became a Borough in 1935 (see newsreel film here).

The most significant event in the post war years was the use by David Bowie and the Beckenham Arts Lab who held a Free Festival in the park in 1969 – the first of the future King of Rock’s four formative years in the town.

During the last 20 years the park became neglected. The bosses in the NHS decreed that all funding for the Hospital should come from HMG and it was saved from closure by protests chaired by Nurse Eileen Howard. The only regular event was the bonfire night fireworks display. In particular, the bandstand showed signs of neglect until a young lady from Russian arrived in Beckenham in 2012. She galvanized the Friends of the park to support her idea to stage a Bowie themed event in September 2013 which raised £8,000 for a new roof.  This spurred the Borough Council into action and an appeal for support  for a bid for money from the Heritage Lottery Fund has been made.  See below:

Early in 2002, Carey asked me if I could arrange for EditPoint to film the Civic Event to mark his 70th Birthday that I was organising in Beckenham Library on Thursday March 14th  –  the exact date of Carey’s Birthday. Carey’s health problems prevented him from attending the event personally, and he died just four months later. Nevertheless, the Library presentation was filmed and Carey took great pleasure in seeing and hearing the comments from his friends.

The film, narrated in This Is Your Life style by Cliff’s fellow BPS member Richard Challen,can be seen below